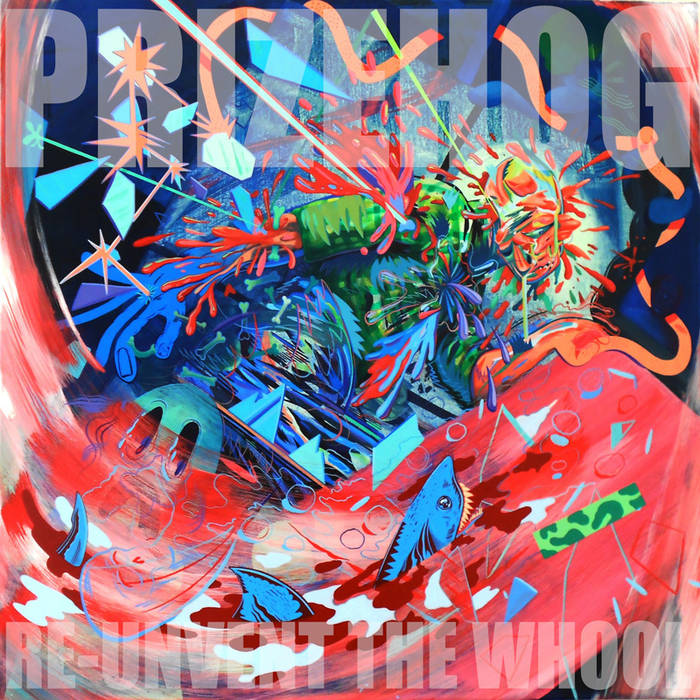 SM Imagine if you will that NASA decided to include the music of Harvey Milk and the Melvins on the gold record attached to the Voyager space probe. Continue to imagine that an alien civilization found said record, listened to it and loved it so much that they decided to record their own take on slow motion, down tuned riffage. The result I imagine would sound a lot like Prizehog. There's no doubt about it, if you dig weird, doomy, slow and heavy music do yourself a favor and dig on this. Favorite track: paradiggum.

A New Dynasty of Stupid

'We were heartbroken when our pals, the local weirdo boy-girl-boy doom crush psych sludge trio Prizehog, decided to leave San Francisco, but we understood - hell, SF is a harsh place to live these days if you're not rich, and ultimately, we weren't surprised to see Prizehog settling in Portland, a city arguably much more hospitable to struggling musicians and artists, but listening to the sonic results of this move, you'd think they were transported to some alien planet, transmitting this new record via some sort of futuristic technology. Cuz holy fuck, if this band was one of our favorites already, they somehow still managed to up the musical ante, taking everything we loved about them before, and making it, well, more. More heavy, more noisy, more psychedelic, more warped, more twisted, more confusional, more proggy, more what-the-fuck, and really just more ridiculously, mindblowingly next level doom-sludge genius. We may be prone to hyperbole, but it still feels like we might be understating just how goddamn good Re-Unvent The Whool really is.
Imagine a warped doom-prog, like some alternate universe metal Magma, processed vocodered vox, tangled up in churning spaced out riffage, underpinned by droning rumbles, and laced with twisted fragmented melodies, launching occasionally into full on sludge-pop creep, like some killer Torche jam spinning in slow motion, a gloriously glacial single digit rpm onslaught, that definitely makes the usual the Harvey Milk comparisons still pretty apt, but imagine HM if they were somehow slower, druggier, proggier and more totally and confusionally WTF. Songs explode some furious grinding metal, squalls of chugging riffage, barraged by machine gun drumming, all wrapped around the bellowed alien vox. But this is doom or sludge, or some twisted avant version, so songs inevitably slow down to a tarpit crawl, swirls of sparkling sci-fi FX surround the proceedings like glittery clouds of malevolent sonic fairy dust. And that's just one song in! And it only gets more gloriously fucked up and next level from there. It's hard to describe what's even going on, cuz some of the music here is literally so unlike anything else out there. These hairy weirdos are channeling some twisted alternate universe sonic garble, and transmuting it into fucking blown out, twisted genius ultra doom, noise pop, prog-sludge nirvana.
The record seems to blackly blossom in stop motion, flitting from near stasis, to frenzied crush and back again, tribal drumming avalanches over thick, coruscating chords, synths spitting out symphonies of klaxons and alarms, the backdrop for the unfurling of an impossibly downtuned, droned out slab of multiple o'd doooooooooom dreaminess, that manages the impossible feat of being crushingly, punishingly heavy, but also, kinda pretty too. Some seriously lovely 'oooooohs' will surface in the midst of a wild chaotic squall of churning blacktar throb, or a cascade of harmonics will rain down like shooting stars over a field of grinding, corrosive crunch, it's goddamn musical alchemy, the sort of musical magic almost no bands are capable of. And then out of fucking nowhere, Prizehog will get all twangy, offering up some sort of country doom, that sounds like it should be ridiculous, and it sort of is, but it's also just about the goddamn greatest thing you'll ever hear, like Earth, Barn Owl, Morricone, Scenic, all melted down, and spit out as a creepy massively metallic Wall Of Voodoo sort of campfire crush, sounds bizarre, and it totally is, but it's a bizarre brilliance that once again, should convince pretty much any doom lover with a penchant for sonic weirdness, that these three are the sludge saviors we've been waiting for, written about in some forbidden text, a fragment from the lost metallic scriptures, and Re-Unvent The Whool, their second coming, signalling some musical rapture, where we're all engulfed in fields of musical flames, but fuck, if this is what the end sounds like, and we can only hope it is, then we say bring it on, and what a way to go.
It's hard to know what else to say, other than repeat what we've always said, Prizehog should be adored, they should be worshipped the way Harvey Milk and Boris and the Melvins are, cuz maybe at one point, Prizehog were simply kids aping their heroes, aspiring to the sludge-y genius and twisted outsider metal of those other groups, but as hard as it may be for some folks to believe, Prizehog, might have outheavied, and outweirded, and outgeniused those masters, and become masters themselves, masters of fucking alien prog-doom, long haired, psych sludge, dirge-drone, damaged art pop. Fuck yeah.
Super striking, full color, eye popping, Wildildlife-worthy cover art, swank spot varnish printed jackets, and includes a download too...' - Aquarius Records

Bandcamp Daily  your guide to the world of Bandcamp

Featuring Oakland sounds from the Smart Bomb collective and Samplelov.